50 Years of Medicare - The Good, the Bad and the Ugly

This year is the 50th anniversary of Medicare, which was originally created in 1965 when people over 65 found it virtually impossible to get private health insurance coverage. The program has been heralded as a huge success in improving the overall health of the elderly. However, it also highly complex and accounts for an ever-increasing portion of the federal budget. 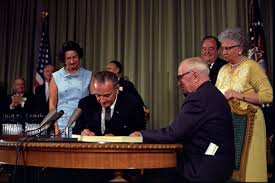 July 30, 1965: With former President Harry S. Truman at his side, President Lyndon B. Johnson signs the Medicare bill into law. — AP

Legislation creating Medicare as well as Medicaid (health care services for certain low-income people and others) passes both houses of Congress by a vote of 70-24 in the Senate and 307-116 in the House. President Johnson signs the Medicare bill into law on July 30 as part of the Social Security Amendments of 1965.

Almost 50 million Americans — 15 percent of the nation's population — depend on Medicare for their health insurance coverage. With increasing life expectancy and more boomers turning 65 every day, the number of people in Medicare is expected to double between the years 2000 and 2030.

Substantial improvements in the efficiency of the program needs to be implemented in order to forestall the predictions that Medicare funding will dry up by 2107. Future generations are counting on it. Let's hope our leaders are up for the task.